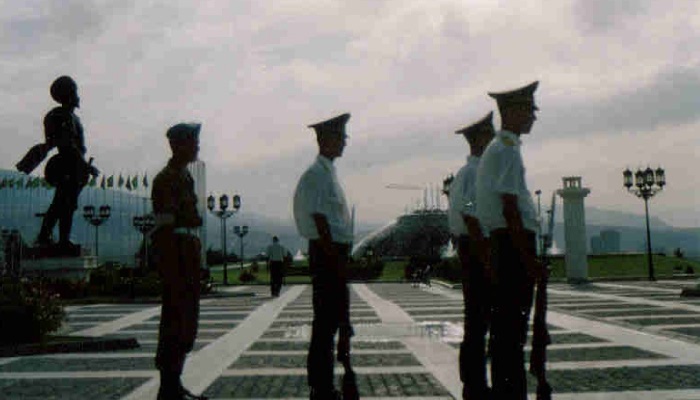 The recruits desert the Turkmen army and even manage to sell their military uniforms and occasionally weapons on the way home from the military units.

Widespread desertions from the Turkmen army have been recorded. Therefore commanders do not dare to distribute the weapons and uniforms to recruits even before taking the military oath. It often happens that as soon as draftees get new uniforms they immediately flee the army and make breakout attempts. Such cases have become most frequent in the military units, located in the Akhal velayat.

"I came to visit my son in one of the military bases in Ashgabat on the occasion of taking the oath and witnessed a strange sight", says the mother of a Turkmen army recruit. – "Young draftees were not wearing any uniforms. They were standing in the line wearing the military shirts, but instead of combat trousers they had sports trousers on. Some had the training shoes on instead of military boots". The commander explained this as follows: "If we provide them with a full combat dress, they would immediately run away. This has already happened before".

The first month of the military service becomes a strength test for draftees. Many of them are not able to tolerate harsh conditions – abuses and offence by officers and senior conscripts, malnutrition, repeated tribal fights. As a result, many flee. According to former servicemen, the most challenging and tough experience for draftees during the first days of military service are harsh discipline standards enforced by the officers, strenuous exercise, hazing, humiliating treatment of juniors and constant hunger.

There are many cases of death among conscripts including suicides. Such cases are carefully disguised by the Military Prosecutor' Office and officers. The bodies of dead soldiers are sent to the parents in sealed zinc coffins, which are not allowed to be opened following the instructions of the military officials. The medical records often indicate hearts attacks as a death cause.

Only after the demobilisation a young man can share with his family and friends what happened during two years of his military service. According to people who served in the Turkmen army the conditions in the barracks are similar to those in prison cells. As a result, the young men flee the army at breakneck speed.