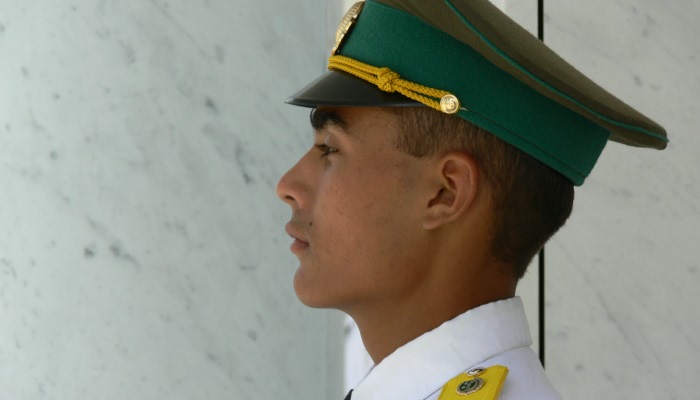 Corruption has become rampant in Turkmenistan. The most terrible thing is that bribery is flourishing in the customs office, the prosecutor's offices, the Ministry of the Interior as well as other law-enforcement agencies.

We will not state that all employees in these agencies are corrupt without exception. Today's article is about the customs service of Turkmenistan. The star of the feature article is the head of freight customs from "Beyik Serdar Ely" (airfreight operations), a lieutenant of the customs service: Yagmur Batyrov.

As witnessed by entrepreneurs who have to work with him, Y. Batyrov blatantly extorts bribes from those involved in international trade. In order to verify whether this was true, our correspondent paid a visit to his office pretending to be an entrepreneur. Below is his story.

"Despite the fact that I was visiting Y. Batyrov's office for the first time, he demanded that I pay 100 US dollars for his regular approval for the freight inspection.

Without displaying any reaction to my surprise, he called another visitor and told me with a grin on his face: "Get out of my office and wait; a young man will come and explain to you, an alien, what planet you live on".

I left the office and waited in the hall. Several minutes later a young man came out of his office, approached me and explained to me in a calm but determined manner: "If you want to get an approval signoff from the head of the department, you need to leave $100 on his desk".

I asked him again: "Why should I pay if my documents are duly completed?"

The young man interrupted me and said: "Don't be surprised when he (the chief) takes a bribe for just a cargo reconsignment. Even the inspectors' subordinates are as angry as a pack of hungry wolves with him because he takes everything".

It is likely, that this customs officer is aware of the fact that huge amounts of money, both in foreign currency and gold, enter and exit Turkmenistan unhampered in both directions, and he considers "his $100" to be a tiny, but legal and well-deserved share.