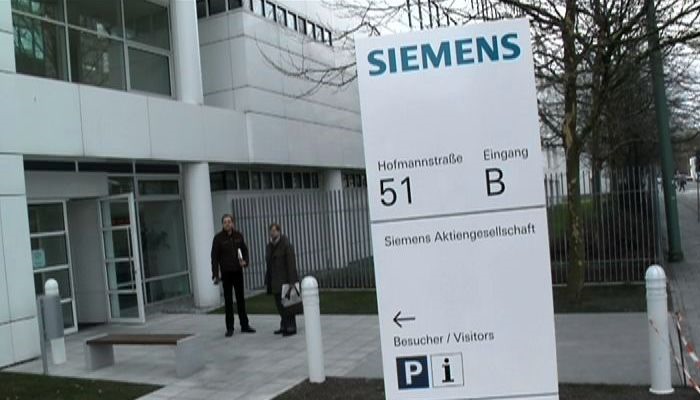 Raids at the Siemens headquarters and several other Siemens offices. Police arrest five suspects, among them former high-ranking managers.

Police discovered a secret financial system that according to the allegations had been used to tap Siemens' internal accounts, siphon off money and use that money to bribe potential customers.

This puts a potentially lucrative joint venture with Nokia in doubt.

The only reason the truth has come out is because Siemens had to make a filing to the US Securities and Exchange Commission. Under German company law, it would not have been required to be so open.

Klaus Kleinfeld was forced to step down down as chief executive of Siemens after a boardroom coup.

Heinrish von Pierer, the head of the Siemens supervisory board, was also pushed to resign and he formally quit on 25.4.2007. He had been chief executive of Siemens at the time of the alleged bribery scandals. Both Mr von Pierer and Mr Kleinfeld have denied any knowledge of any scams.

Kleinfeld's comment: "In these times, the company needs to retain clarity about its leadership. The company must remain effective."

The coup against him appears to have been engineered by Josef Ackermann, the Swiss-born chief executive of Deutsche Bank, who is Siemens non-executive director. The banker's concern was that the corruption scandals would seriously complicate the relationship of Siemens with the SEC.

Two investigations are underway. One is into allegations of a slush fund set up to channel bribes totalling �?�426 million to foreign clients during the 1990's. It had been fraudulently entered into company's books as payments for consulting services. A second inquiry begun in March which is looking into claims that cash was paid to employer-friendly workforce representatives.

The SEC has been conducting an informal inquiry into allegations of slush funds at Siemens, and this morning the company confirmed that this has now been converted into a formal investigation.

Siemens is to pay the �?�38 million cash it gained from corrupt sales as two former managers get suspended sentences.

Andreas Kley, the former finance director at Siemens' power generation operation, was found quilty of bribery and breach of fiduciary duty and given a two-year suspended prison sentence. Hors Vigener, a former consultant to Siemens, was given a ninc-month suspended sentence after being found quilty of aiding the bribery. They were found guilty of paying �?� 6million in bribes to managers at Enel, the Italian utility, to win turbine contracts worth about �?�450 million, between 1999-2002

Recently, Siemens admitted that it is being investigated both by the Securities and Exchange Commission and the Department of Justice into allegations the German group had operated slush funds and violated US law.

The German electronics and engineering conglomerate broadens its investigation into a possible �?�1billion slush fund. A company source confirmed that a continuing investigation had been widened to include Siemens's power generation, power transmission, transport systems, health care and industrial solutions unit.

ministers as well as other officials in Nigeria, Libya and Russia as

agreed to pay a �?�201 million fine decreed by the court.

The court focused on bribes between 2001-2004 connected to Reinhard Siekaczek, a Siemens employee who was a manager in a telecommunications equipmen unit. Mr Siekaczek has been charged with embezzlement and is co-operating with prosecutors. He is in cooperation with prosecutors and according to separate court documents, has told that he knows about bribes beyond Nigeria, Russia and Libya, that were made with the knowledge of senior managers. He alleges that he has knowledge of corruption involving Siemens managers in more than a dozen countries, including Brazil, Cameroon, Egypt, Greece, Poland, and Spain. If Siemens is found to have acted corruptly in certain other countries, including the US, it will also face bans on public-sector contracts.

Evidence from key witness details millions of euros paid in bribes to officials in Nigeria, Russia, and Libya.

The payments were made as the company sought to win lucrative contract for telecommunications equipment.

A US law firm hired by Siemens last December to investigate the corruption at the company, is understood to be scrutinising activities in 65 countries.

A Nigerian anti-corruption agency has begun investigating former ministers alleged to have taken bribes from the German telecoms firm, Siemens.

Names of the court papers that emerged last week included Bello Mohammed Haliru, the late Haruna Elewi and Tajudeen Olanrewaju. Dr.Mohammed and Gen Olanrewaju have denied taking payments from Siemens. The Independent Corrupt Practices and Other Related Offences Commission (ICPC) has summoned more than 10 officials for questioning into the affair, after President Yar'Adua ordered the security agencies to "take appropriate legal action".