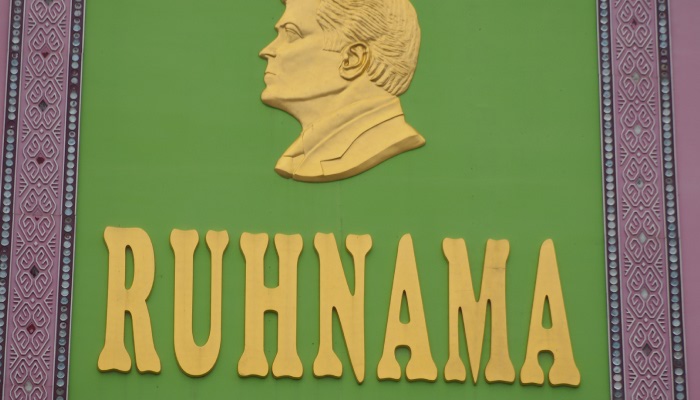 Despite moves in Turkmenistan to downplay the once-dominant role of the Ruhnama, a work written by the late president Saparmurat Niazov, the celebrations for the book’s tenth anniversary have shown it is not dead yet.

On September 12, Ruhnama events and exhibitions were held at schools, universities, libraries and museums in Turkmenistan.

As one observer in the capital Ashgabat said, “Everything was the same as ever.”

Ruhnama called the source of wisdom and ethics was personally signed by Saparmurat Niyazov, ex leader of Turkmenistan, who called himself the leader of all Turkmen and suddenly died in 2006.

The Ruhnama is a collection of Niazov’s reflections on Turkmen folklore and history, and became the textbook for the personality cult he built up around him.

It was mandatory reading in kindergartens, schools, universities and the workplace. Applicants for the civil service had to sit a test in their knowledge of the Ruhnama, and when criminals were pardoned and officials were disgraced, they had to swear repentance on the book. Copies were even placed in mosques in this mainly Muslim country, the implication being that Niazov’s words carried the same weight as the Koran.

This year, Ruhnama tests began to be dropped from school-leaving exams and university admissions. (See Turkmenistan Drops Propaganda Exam). Schools have cut the number of classes devoted to Niazov’s book, replacing them with general social sciences.

The mini-museums set up as shrines to the Ruhnama in institutions have also started to close, although observers say most remain intact.

A university lecturer said it would be a long time before the “rich heritage” of the Ruhnama would become redundant, as it was central to the educational system and employment qualifications.

Dilfuza, a 20-year-old history student in Ashgabat, belongs to the generation inculcated in the Ruhnama, and believes it will survive despite efforts to marginalise it.

“Many people have been brought up with this book, and they will bring up their children with it. It is sacred to us,” she said.