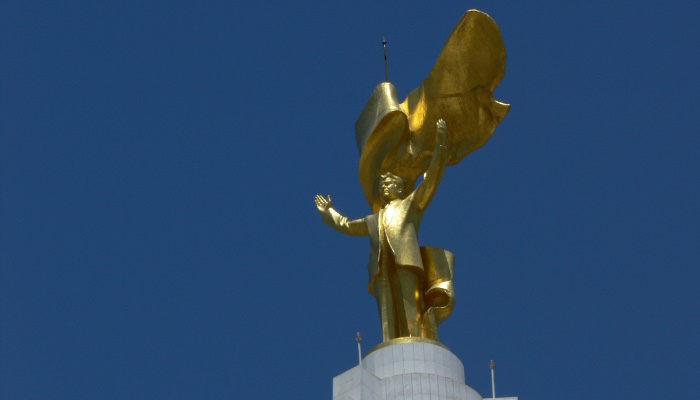 But here's the kicker. If incentives are not created by US policymakers – in recognition of the move, however small, away from isolationism and strict authoritarianism – and if regional instabilities with neighboring Afghanistan continue unabated, there is a serious risk that the progress made by one of the world most repressive regimes will be quickly undermined.

For those who don't follow Sasha Baron Cohen's films, the primary character in the movie "The Dictator" was based loosely on a conglomeration of authoritarian leaders, one of which was former president of Turkmenistan, Saparmurat Niyazov.

Niyazov, known to those living in the country as "Turkmenbashi," or Father of the Turkmen, had a cult-like personality. He placed golden statues of himself throughout the country and ran one of the most closed and authoritarian regimes in the world.

The sudden death of Turkmenbashi on December 21, 2006, however, created an opening, and his former deputy prime minister and dentist became his successor. Currently serving his second five-year term, President Gurbanguly Berdimuhamedow has shown some willingness to open Turkmenistan to the international community, although these movements away from strict authoritarian rule go under-reported by media and diplomats.

Domestically, for example, Berdimuhamedow, restored pensions to more than 100,000 elderly citizens, reversing President Niyazov's decisions to withdraw them in 2005. Berdimuhamedow also worked to overturn Turkmenbashi's ban on graduate programs and has supported attendance for young Turkmen at foreign universities.

Internationally, while Turkmenistan has historically exported most of its gas to the Russian Federation, under new leadership it opened its export regime to include both China and Iran. The country is rumored to possess the world's fifth largest estimated reserves of natural gas. These moves should be perceived as openings, not closings.

More moves like this should please the international community. First, the new president brokered a dialogue on the protection of human rights – a move unheard of under former leader Turkmenbashi. Second, the country finally acceded to the 1961 Convention on the Reduction of Statelessness and became the first country in Central Asia to accede to both statelessness conventions. Third, it hosted the International Ministerial Conference of the Organization of Islamic Cooperation (OIC) on Refugees in the Muslim World in Ashgabat in May 2012. These are all good steps in the right direction.

But let us be clear. This progress is marginal to say the least.

There's still much more work to be done. Tellingly, the international community, particularly the Organization for Security and Cooperation in Europe refused to send a mission to observe the last election, claiming that the lack of political competition meant a monitoring mission was pointless.

It is true. The current regime often mimics the past rule of Turkmenbashi. While the sitting president has dismantled aspects of his predecessor's personality cult, there is cynicism that this was done simply to create a new cult-personality image. Furthermore, young police man every corner in the capital of Ashgrabat. Phones of opposition, and even regime supporters, are regularly tapped. And the government continues to portion out everything from fuel to the internet – maintaining control and perpetuating a culture of fear.

Despite this, the small progress that was made in the first term – domestically and internationally – is at risk if there's no recognition and support from the international community. Recognition by US officials of Turkmenistan's small-scale progress is critical. This gives Berdimuhamedow incentives to continue working in this direction and not return to Turkmenbashi-style rule.

Similar, spillover from instability in Afghanistan after troop pull-out in 2014, or sudden regime change in Uzbekistan, could compel Berdimuhamedow to return the country to something more repressive. It is time, therefore, for western diplomats and development agencies to work more closely with the country on contingency planning and assist the Turkmen government in maintaining its progressive forward movement. Now is not the time to turn away from Turkmenistan but rather to engage it, fully.