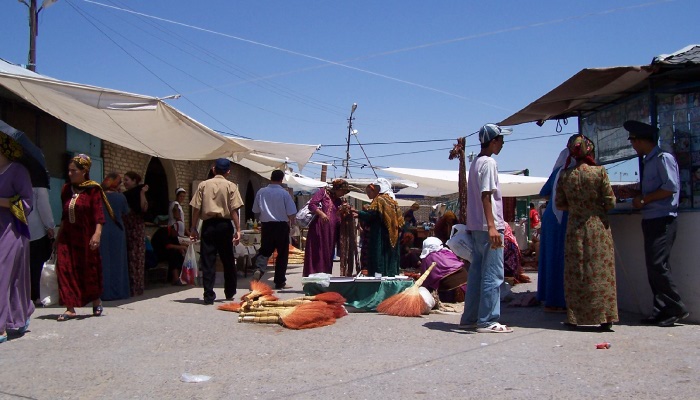 During the Cabinet session on 6 December the Turkmen President instructed Vice Presidents P. Taganov and A. Gochyev to keep the merchandise in the country's shops and markets under strict control and demanded that all measures be promptly taken to prevent price increases in the run-up to the New Year celebrations.

In late November our colleagues conducted a small survey to check on food prices. The Turkish supermarket Yimpash in Ashgabat was chosen as a "testing area". This is the only supermarket in Turkmenistan which meets international customer service standards and features a wide selection of goods and merchandise at affordable prices and of good quality. Moreover, in Yimpas there is no false weighing or cheating, which has become a common phenomenon and nightmare for customers in the bazaars. However, if the responsible agencies conducted random test purchases and punished identified bazaar swindlers, the problem can be considerably decreased.

In most cases prices for basic food products are a bit lower than in the markets. This is done to attract a larger number of customers. And the company succeeds in this. More and more people go to Yimpas rather than the market. When the supermarket first opened, it targeted the middle class whereas it has now become more affordable for the majority of Ashgabat residents.

Until recently another similar local supermarket "Byash yildiz" was operating but it has been closed down. It was owned by the former head of the Turkmen President's staff office Kh. Mukhammedov, who has now fallen into disgrace.

Fresh meat (bazaar price) – 20–30 manats per kilo ($7-$10.50). Yimpas does not sell beef since the authorities demand that vendors sell meat at a maximum price of 12 manats per kilo ($4.20). Only frozen meat from India which is sold in state-run store can be purchased at such a price. However there is virtually no demand for it. Fresh fish (bazaar price) – 20-40 manats per kilo. Silver carp is the cheapest whereas catfish, pike perch and grass carp are the most expensive. All other prices are quoted from Yimpas at the official exchange rate $1 = 2,85 manats.

It must be noted that the price for instant coffee increased over 10% within the last month. A 50 gram jar of "Elite Platinum" coffee cost 5,10 manats a month ago whereas today it is sold at 6,50 manats. The price hike has affected all instant coffee brands.

Interestingly, almost all fruits and vegetables sold in the bazaars are imported. Food products come mainly from Iran, Turkey, Kazakhstan and Russia.

As for salaries, below are some figures: the monthly salary of a secondary school teacher is 800-900 manats, medical doctors are paid 700-800 manats a month whereas paramedics get 600-700 manats. Salaries of ordinary office employees in ministries and agencies range from 600 to 800 manats.

According to our estimates, a family of four people with two adults and two minor children spends 1200-1300 manats ($420-$455) a month on food only based on Yimpas prices and according to the generally-accepted average diet.

Some may say that 50 manats a day are sufficient to feed a similar family. Don't believe this as it is impossible to do so without buying low quality food and excluding some important items such as fruit, meat and fish from the diet. One can survive on bread and tea with sugar. However, we believe that the residents deserve the best.

People also have to buy clothes, pay their utilities bills, transport fares, pharmaceutical products and may have emergency expenses etc. Many civil servants have mortgage repayments.

The authorities are proud that for many years the residents have had water and gas supply almost free of charge. It appears that the recent decision made by the government on installing meters and introducing limits on water and gas consumption starting from 2014 can be viewed as an indicator of problems within the economy.

It should be highlighted that the above research applies to the capital only. The situation in the provinces is much worse due, inter alia, to the high unemployment rate.

Vice President of the Turkmen government A. Gochyev, responsible for the economy and finance, was severely reprimanded at the Cabinet session mentioned at the beginning of the article.