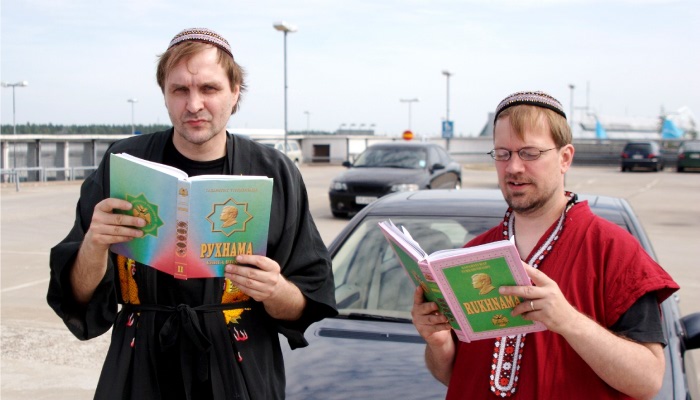 There have been three attempts to liquidate him. First someone tried to shoot Holmurad Soyunov, 51, but failed. Later there was an attempt to thrown him from a moving train. He survived. The third attempt was the most serious: his glass of brandy was poisoned.
In spite of all of this, Soyunov is still alive, visiting Helsinki telling about the extreme measures taken by the dictatorship of Turkmenistan to hold on to power. He currently lives in Sweden, and even speaks Swedish - "the language of freedom".
Soyunov, a former member of the Turkmen Parliament, and his friend and fellow refugee, 47-year-old Farid Tuhbatullin, who now lives in Vienna, are both human rights advocates. They also share the same fate: torture and imprisonment, and a tightening of the controls.

The two are also key witnesses in the new documentary film by Arto Halonen, Shadow of the Holy Book. They can speak freely, but in Turkmenistan there is an extensive underground opposition, whose only possibility is to smuggle their information to friends in the free world.
Turkmenistan, which is one of the richest countries in Central Asia as far as natural resources go, has plenty of friends. Its oil and gas reserves are vast. Agreements were recently signed with Russia and China for new pipelines. Large companies in the west have also sniffed out the growing energy money.
There is a heavy price to pay. It is humiliating. The film documents it in its gruesomely tragicomic images.
Companies are required to collaborate in the personality cult. This is why Ruhnama, "The Book of Souls" written by the now dead dictator Sarparmurat Nijazov, has to be translated into the language of the company's country of origin as a way of closing a deal.

The book praising the dictator has been translated into 41 different languages. Most recently, in January it appeared in the Tatar language, as the Kamaz car factory in Tatarstan wanted access to the Turkmen market.
The book has also been translated into Finnish, although there is only one copy lying in a safe.
A cult of Ruhnama dominates Turkmenistan, its meticulously controlled state television channel, the street scene in the capital Ashgabat, the surfaces of the walls of schools and factories, as well as school textbooks, and the everyday lives of the people.

President Gurbanguly Berdymuhammedov, who took office last year, is continuing the personality cult - and the torture. Borders are closed. "International aid and human rights organisations have no access to the country, nor do journalists", Soyunov says.

"The situation in my former home country is sad. Many dissidents languish in prisons. In January even nature turned against them. It was an unusually cold winter. The temperature at night fell down to between -30 and -35 degrees Celsius, and even during the day it was about -20. It snowed for weeks, roads were cut off, and the whole country was in a state of emergency."

"It meant that masses of people locked in the prisons died. There is no heating in the concrete barracks. Villages were also left without electricity. People and cattle died. They do not know how to deal with catastrophic situations."

We may never know how many people were killed by the winter. The state reports on other matters. A week ago an elite school was opened in the capital, in the shape of the book Ruhnama, carrying its name. A Ruhnama university has already been built.
In the centre of the capital, which has the feel of a Potemkin village, golden statues of the dictator can be seen. They have replaced the previous statues of V.I. Lenin.

Marxist-Leninist brainwashing was replaced in a snap with a new kind. The Turkmens are now the chosen people of the universe.

"Oil and gas prop up the dictatorship, making it more grandiose and more dangerous", says Tuhbatullin, who maintains a human rights website.

"Freedom of speech is so restricted that you can't even move freely on the Internet, which is also monitored by the eye of Ruhnama. Turkmenistan has the world's most highly-developed surveillance technology."

Meeting foreigners is deadly. Once a French television crew got into the country. A local resident who served as their guide was killed as soon as the French left. Halonen's camera crews that entered the country a total of four times were more cautious. No corpses were left in their wake.

The film is massively important for the opposition of Turkmenistan, which continues to believe that it can breathe freely some day. Tuhbatullin, who produces films and animations himself, hopes that Shadow of the Holy Book will open the eyes of the world. "It is a cry for help of our people." European help for human rights and legislative work is sorely and rapidly needed. In Finland an appeal was made to Parliament for some of that support. Not much came from that. The men were nevertheless especially pleased at the attention that they got from President Tarja Halonen. The film Shadow of the Holy Book is expected to spread in Turkmenistan in the form of underground samizdat copies from hand to hand, just like the songs of Vladimir Vysotski, which were once banned in the Soviet Union.