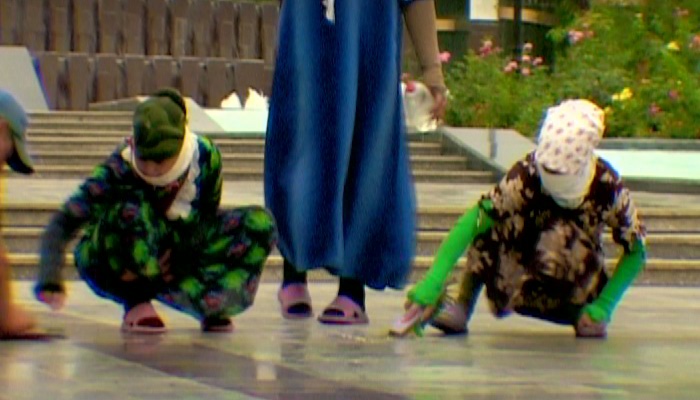 For women, there are two main reasons why life is difficult in Turkmenistan. One is because the republic is a dictatorship and doesn't care so much about its people. The second is because they are women... as in most of the country in the world, unfortunately. "Under the same restrictions as men, women additionally face patriarchal traditions, inadequate legislation regarding violence against women and domestic violence, and dismal health conditions", says The Norwegian Helsinki Committee (NHC) in its new report, "Women: Turkmenistan's second-class citizens. Equal only to injustice and vulnerable to arbitrariness."

For women, there are two main reasons why life is difficult in Turkmenistan. One is because the republic is a dictatorship and doesn't care so much about its people. The second is because they are women... as in most of the country in the world, unfortunately. "Under the same restrictions as men, women additionally face patriarchal traditions, inadequate legislation regarding violence against women and domestic violence, and dismal health conditions", says The Norwegian Helsinki Committee (NHC) in its new report, "Women: Turkmenistan's second-class citizens. Equal only to injustice and vulnerable to arbitrariness."

One of the good reasons to read the 40 pages report is that it is an on-the-ground research. As explain the authors, the "lack of reliable statistics and the authorities' systematic repressive actions towards any activity in civil society complicate attempts to monitor, evaluate or address the situation from within, to a much greater extent than in neighboring countries." But with a strong network "of Turkmen citizens who are concerned with the situation in the country", NHC says it interviewed "more than 10 000 women mostly based in the capital Ashgabat, but also in the regions."

The report recalls many times also how numerous are the Turkmen "women [who] are the main bread winners for themselves, their children and their families." The social and economical context is indeed heavy: high unemployment rate, many men drug addicted, corruption, in the education or healthcare sectors for example, etc. "For me, the most important information described by this report is the amount of work, expectations and pressure put on women from so many sides – the state, the family, the society, the spouse, poverty", says Lene Wetteland, NHC Central Asia advisor.

Certainly, "Turkmen legislation does not discriminate women. On the contrary, new legal provisions are mostly aimed at the elimination of discrimination of women in all fields of life and overall protection according to CEDAW1, and include various measures appearing to guarantee liability for any violation of these rights. These provisions are repeated in several laws including the Constitution." But the problem is that "the laws that defend women's rights on paper create a false fa"ade of good intentions towards women freedoms and equality in society", says the report.

After reading these 40 pages, we had the feeling that traditionalism is not something coming only from the bottom of the society. "The government underlines and promotes traditional family values to keep away women, men, youth, from developing organizations and prevent them to campaign for better conditions. Thus, they are always reminded they should respect authorities in the family and in the society, and refrain from asking critical questions", asserts Lene Wetteland.

Traditionnalism is also coming from the top, certainly with the aim to use it as a tool to control the society. Unless that Turkmen President, Gurbanguly Berdymukhammedov, is not more progressive and educated than a peasant living in a remote place in the Karakum desert. The author of the report recall for example Mr Berdymukhammedov as saying: "Girls need to learn the basics of sewing, carpet weaving, cooking; in short, everything that a future house wife needs to know... The boys have to plant trees and learn carpentry and other work skills."

That's him also who fix the social stereotypes and contribute heavily to make the Turkmen women second-class citizens. NHC recalls also the time of the 2012 presidential elections, when "the president appeared with his family consisting only of males. There was not one single woman present – no mother, no wife, no daughter-in-law. An impression was made that there was no place for the women next to the men at the polling station." There is just an organization dealing with women's problems, Women's Union of Turkmenistan. But it has no independence from the Government: "At the CEDAW hearing in Geneva in October 2012, the [Turkmen] delegation (...) was unable to explain why the head of the Women's Union was present in Geneva as a member of the official delegation if she was representing an NGO", reveals the report.

No one should be surprised then, if for example the various institutions of the country repeat the same stereotypes than the Head of State. "On 8 March 2013, the Makhtumkuli Youth Association organized a "Student Beauty" contest for female students in universities. In their coverage, the State News Agency praised the "Culinary abilities of competitors, who were able to show their skills in art of laying of the festive table with appetizing foods", says the report.

Another evidence of the political use of the traditionalism is the question of women's dress. That's "a subject of high level state politics", asserts NHC. Indeed, women, at work or during public celebrations and holy days, and girls at school are obliged to wear national dress, even if they are not ethnic Turkmen, with embroidery on the chest, their hair shall be gathered in two plaits and covered by a skull-cap named takhya. And, now, the trend is to encourage to wear these national clothes even in private: "The first pages of the official newspapers have also printed guidelines by the President for more private occasions. In a recent statement, he stated that it is more appropriate for young brides-to-be to wear national dresses at their wedding rather than the white European dresses that have become so popular lately."

This political environment contributes to weaken women's situation in the country. Whether we speak about how it comes through unequal education between girls and boys, the passivity of police when it has to protect a women victim of domestic violence, the discrimination with employment, women being not effectively protected by the law. For example, few women are using their right to use the maternity leave. "First, they will not have any means to support their family during the leave. Second, they understand that it is not very likely that their work place will remain if they return after three years' child care leave", explains the authors of the report.

1 Convention on the Elimination of All Forms of Discrimination against Women.