Please enter your DISQUS subdomain in order to use the 'Disqus Comments (for Joomla)' plugin. If you don't have a DISQUS account, register for one here
October 19, 2011 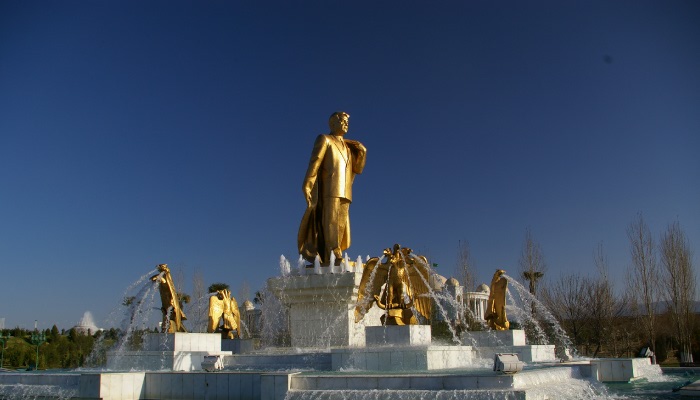 President Gurbanguly Berdymukhamedov’s visit to New York last month to attend the UN General Assembly wasn’t as impressive as past trips, and he seemed overshadowed by other Central Asian leaders — Kyrgyzstan is seeking a seat on the UN Security Council and Uzbekistan is now newly-engaged by the US for the sake of the supply route to Afghanistan, the Northern Distribution Network (NDN).

Yet there were still those who wanted to cultivate ties to the Turkmen leader for the same reasons of energy and security and the NDN — it’s just that the efforts haven’t gone as successfully as they have with other Central Asian nations.

Eric Stewart, Executive Director of the Turkmenistan-US Business Council, and James Albaugh, Executive Vice President of the Boeing Company, and other business people (not named) did meet with President Berdymukhamedov, the State News Agency of Turkmenistan (TDH) reported. But they don’t seem to be doing as well as the American-Uzbekistan Chamber of Commerce which had a high-profile all-day conference in Washington, DC recently. If there are any new big contracts for US businesses in Turkmenistan, we haven’t heard of them — Chevron and others are still waiting for drilling permits.

It seems as if American officials are still trying to find a way to Berdymukhamedov’s heart. In the beginning of his rule in 2007, it seemed that his stated intention of making educational reforms and bringing Turkmenistan into the modern information age were a reasonable basis for cautiously-optimistic bilateral exchanges. But the educational exchanges went through a very rocky period before finally getting back on track at a lesser level; professional exchanges and even the Peace Corps have had their troubles.

The Turkmen leader’s trip to the Metropolitican Museum therefore provided an opportunity to try again to reach Berdymukhamedov where he lived — he has invested a great deal in museums in Turkmenistan — and try to build some rapport. The Turkmen president had visited there before on his past trips, including the memorable occasion when he was able to get himself photographed with President Barack Obama and the First Lady in 2008.

This time, Berdymukhamedov got a personal tour from Jennifer Russel, associate director of the Metropolitan Museum and Navina Haidar, the Islamic art curator for the Museum. Deputy Assistant Secretary of State Susan Elliot also accompanied the group, as did Professor Ronald LaPorte, director of the University of Pittsburg Multidisciplinary Masters of Public Health Program, and Alexei Tikhomirov, vice president of the International Informatization Academy. This UN-accredited group gave Berdymukhamedov an award for his supposed promotion of the Internet in an obsequious ceremony staged in Trenton, New Jersey several years ago — the Russian-sponsored Academy members also engage in consulting for clients in the energy sector.

The museum experts showed Berdymukhamedov the Islamic collection; as a leader of a largely Muslim country, with many sacred Islamic locations and artifacts of its own, he was expected to be interested in these displays — and he was even allowed to see a new exhibit not yet open to the public.

Then the distinguished guests sat down to a round-table discussion, where additional State Department and UN officials, museum employees and journalists (although we don’t know any) were also participants. The talk was anodyne — about the crucial educational role that museums play in humanitarian and cultural exchange. Deputy Assistant Secretary Elliot presented the Turkmen leader a book published in conjunction with Yale University Press about Turkmen national jewelry prepared by Museum experts and American art historians timed especially for this event (said TDN) — it was the kind of book Berdymukhamedov himself — author of tomes on everything from race horses to medicinal plants — might have written. This was the president’s cue to wax eloquent about “the powerful states founded by the Turkmen nation in remotest antiquity such as Margush, Parthia, the Seljuk Empire” and to invite the Museum experts to visit Turkmenistan.

And this is where it became most cringe-worthy for our team. Tikhomirov then produced a letter from Google’s Vice President Vincent Cerf who sent a welcoming message to the roundtable, “appreciating highly the significant contribution President Gurbanguly Berdymukhamedov made to bring national cultures together,” in particular “for the leadership and achievements in exploring Internet technologies in the social and cultural sphere.” Cerf added that the Western world had not had an opportunity to access the beauty of Islamic art, and thanked the Turkmen president for his new initiative to create a virtual gallery of Turkmen art online.

Professor LaPorte then called the president “an ideal leader for implementation of the projects of this kind who is perfectly informed about health care, education, culture and research,” TDN quoted him as saying. DAS Elliot said the US welcomed such research and education projects and congratulated the Turkmen people on their forthcoming 20th anniversary.

All very pleasant — but disconcerting. It’s troubling when American intellectuals and public officials are part of an effort, perhaps begun innocently enough as a cultural celebration — that winds up endorsing the Turkmen dictator as an Internet innovator.

After all, this is the ruthless leader who just had a Radio Free Europe/Radio Liberty reporter sentenced to five years of prison–a man who had provided an independent and honest account of the Abadan explosion. This is the dictator who suddenly cut off mobile phone service for 2.4 million people over a business (and political?) dispute with the Russian company MTS. This is the man who makes people provide their passports and face Chinese-supplied filtering software in order to use Internet cafes. This is the leader who had two Turkmen singers popular on Youtube sent off to jail for giving an interview to Turkish TV.

The Americans’ praise of cultural initiatives might be warranted if they at least quietly raised some of Turkmenistan’s many troubling human rights problems — particularly suppression of the Internet. Yet it’s unlikely they did that on this occasion, and instead, they have served as ornaments for a US government effort to try to establish rapport with a finicky tyrant for the sake of their energy and war supply needs.