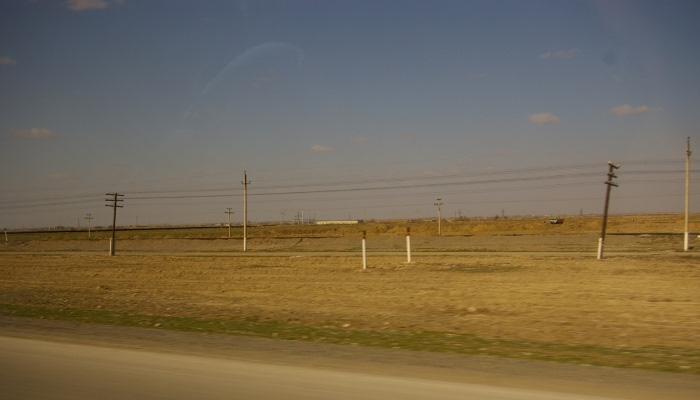 Xi Jinping, the new Chinese President, made an exceptionally long trip to Central Asia this month, between 3rd and 13th of September. He started his visit in Turkmenistan where he secured new energy deals� and a prosperous future for his country in the former Soviet republic

Xi Jinping's visit to Turkmenistan on September 3rd might be remembered as a breaking point in the Sino-Turkmen history. Symbolically at least, but we know how symbols are important in politics. During, his visit, Xi Jinping and his Turkmen counterpart, Gurbanguly Berdimukhamedov, signed a joint declaration lifting "bilateral relations to the level of strategic partnership." "That is significant, because for Beijing it is not an empty paper. It endorses the engagement of China in the country. Today, its balance of trade with Turkmenistan is about six times greater than the one between Turkmenistan and Russia. It is striking to see how China deepened its presence in the region since 2008", observes Thierry Kellner, a specialist of China – Central Asia relations at the Université libre de Bruxelles.

But the new status that China gained in Ashgabat this month is also coming from signing deals in the energy sector. Three major deals were concluded. First, China National Petroleum Corp (CNPC) and TurkmenGas agreed to the purchase of 25 billion cubic metres (bcm) of gas a year the agreement was of 40 bcm/y before. Thus, it should bring, probably by the end of the decade, Turkmen gas exports to China up to 65 bcm of gas annually. Last year, Turkmenistan shipped 21.4 bcm to China, through the Central Asia–China gas pipeline, inaugurated in 2009. Second, China promised to finance the second stage of development at the Galkynysh gas field, probably the world's second-biggest gas field. Third is the construction of a new line of the Turkmenistan – China pipeline. Another important point is the agreement to build a 30 bcm/year processing complex.

Experts underlined the fact that China is to finance the second stage of Galkynysh, although there are no details, as a confirmation of the very long term nature of China's commitment in Turkmenistan. But, it is not only about energy cooperation. Xi Jinping's visit in Central Asia is "in many respects "historical", especially because he proposed a new strategy to the region. Instead of sticking to the concept of a free trade area??, he offered to develop a more elaborate "economic belt along the Silk Road.", says Konstantin Syroezhkin, Chief Researcher of Kazakhstan Institute for Strategic Studies (KISI). Indeed, at a conference at the Nazarbayev University in Astana, Xi proposed to deepen and diversify Chinese cooperation with Central Asia. It remains to see if the idea will become reality.

Strategically, Beijing is improving its positions in Central Asia and Turkmenistan. For example, the construction of a fourth pipeline going via Uzbekistan, Tajikistan and Kyrgyzstan will allow China to be less reliant on Kazakhstan for transit. In the meantime, China gives Tajikistan and Kyrgyzstan, who are sick of relying on Uzbekistan and Kazakhstan for gas, some new possibilities to purchase gas and fill a bit more their budget. In this, Ashgabat is more connected to its neighbors thanks to China. Moreover, "We cannot exclude that China is closer to make even more ambitious plans beyond the region, namely, to take another important step in terms of the formation of transport and energy bridge with Iran", thinks Vladimir Paramonov, Director of the Project "Central Eurasia", in Tashkent.

Are China's increasing positions in Central Asia detrimental to Russian positions? "Beijing is going ahead with a "more business than politics" approach. That's help her to greatly reduces the influence of Russia. However, the coordination between Moscow and Beijing in Central Asia is high. Overall, China fills mostly the niches abandoned by Russia, after the collapse of the USSR", says Paramonov.

Beijing is certainly satisfied about the new status it has in Turkmenistan. But, what about Ashgabat? It seems clear that Turkmenistan is becoming economically more dependent on China. For the past two or three years, Ashgabat is full of rumors that Chinese customers try to renegotiate their import prices downwards. But Central Asia natural gas is also crucial for China, especially Turkmen gas. Turkmenistan is now China's largest foreign supplier of natural gas, with 51.4 percent of imports, according to data published by the BP Statistical Review of World Energy.

"It should be noted that the energy factor has become even more important this year as environmental degradation in China has reached an alarming level. Xi Jinping's administration recognizes that it is a political, social and economic issue to be addressed urgently. The legitimacy of the Party was questioned last year, with the Bo Xilai case, is has to be consolidated. In this context, the improvement in air quality is a priority. Gas supplies therefore become even more important as Beijing is trying to limit its dependence on coal. So that the agreements in Central Asia do not exclude others with Russia", argues Michal Meidan, an analyst at Eurasia Group.