Please enter your DISQUS subdomain in order to use the 'Disqus Comments (for Joomla)' plugin. If you don't have a DISQUS account, register for one here
January 16, 2008 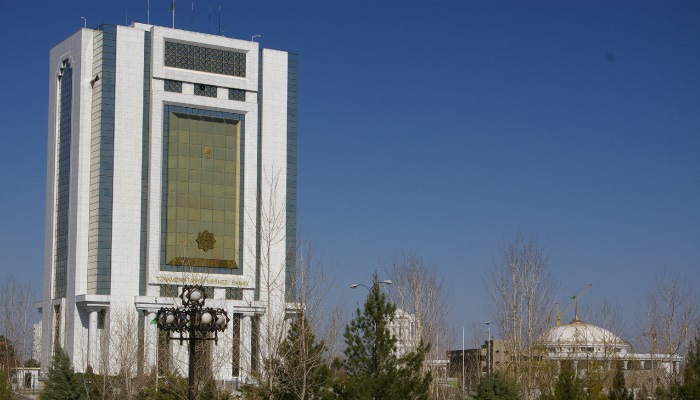 Near Paris, in the middle of a forest, away from outsiders gaze, shines the spectacular headquarters of Bouygues, called Challenger. One of the world's largest construction companies has not spared any costs creating their facade. The headquarters has been compared to the palace of Versailles, which was built by the Sun King Louis XIV: the gigantic buildings are so much alike in size and form.

Challenger is a great promotional tool for Bouygues. Many extinguished guests are taken there for a visit to be awed by the megalomaniac atmosphere. Many Central Asian rulers have experienced the spell of this place, including the Turkmen dictator Saparmurat Niyazov.

Bouygues became Niyazov's trusted construction force. Thanks to the French, many new buildings have risen to the capital of Turkmenistan. These being; The Presidential Palace, Parliament House, and in the outskirts of the city lies Asia's biggest Mosque which domes has been made of gold. Bouygues has also built the Olympic Stadium, and the Olympic Complex, eventhough the Olympic Games have never been hosted in the country, and it is not very likely that they ever will be. Even though the local people and journalists have never got to experience the freedom of media, Bouygues has built the House of Free Media in Ashgabat.

To secure the continuation of it's business activity, Bouygues has had the second Ruhnama book translated into French language. Everything that is possible to do to secure good business deals and continuation has been done.

Bouygues has long been a partner of the Turkmen dictatorship and thus shown western companies that it is possible to co-operate with morally daunting partners. This can be seen as both positive and negative. At its best, companies can spread their democratic culture and thinking to totalitarian states. At worst, the company gets even more corrupted and spreads this negative "energy" and model of behaviour largely to the business world.

There has been a big change in Turkmenistan since Bouygues started its Turkmen operations, supported by President Fran�ois Mitterrand, in the beginning of the 1990's. The country has become more dictatorial; freedom of speech and human rights have collapsed. At the same time Bouygues operations there have increased and the Bouygues-owned French TV-channel TF1 has helped the Turkmen administration to produce propaganda and to spread it.

At the moment Bouygues refuses to talk about its Turkmen operations and the morals that guide them. Care and responsibility for people's rights have not risen at the Bouygues headquarters, or at least they have not spread outside the Challenger closed walls.

Louis XVI passed in his time the so called "black legislature", that allowed the total abuse of slaves in colonies. Bouygues has again acted as an example to the outside world by working in totalitarian countries with no restrictions. However, the law of the Sun King also brought some alleviation to the exploitation of the slaves. This so called institutionalisation gave the slaves some rights such as early pension that, in the end, became the beginning of more equal treatment of human beings.

The example that Bouygues gives through its action requires a new set of rules and obligations. It requires the strength to bring totalitarian states laws that would make the environment more humane, laws that would tell the conditions in which to build golden palaces and buildings for free media.

Let this courage be a challenge for Bouygues, in the spirit of new time and the Sun King.