Please enter your DISQUS subdomain in order to use the 'Disqus Comments (for Joomla)' plugin. If you don't have a DISQUS account, register for one here
April 15, 2008 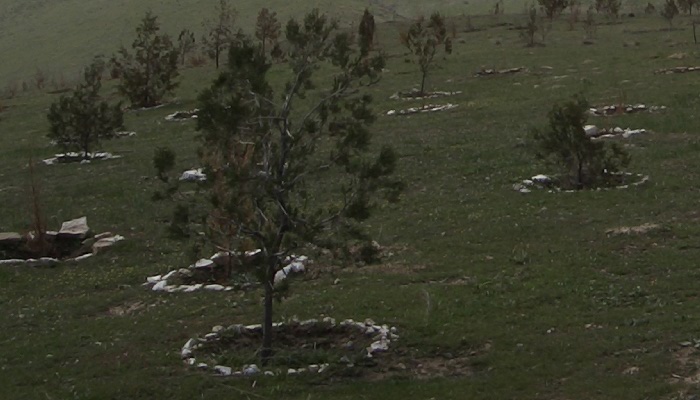 A large construction project has been launched in Dashoguz. Along the Gerogly prospect (former Yuzhnaya street), a Turkish company "Sekhil" fenced off a huge plot of land for the construction of the Rukhyet Palace with a hall designed to hold 2800 seats.

The idea to build a similar palace for holding the annual sessions of the Khalk Maslakhaty in each velayat belongs to the previous President S.Niyazov. The leader of all Turkmens who like all dictators suffered from gigantomania, did not spare the state money from being used on similar impressive buildings. The first white-marble palace Rukhyet was built in the capital. The second was built in Mary by Turkish construction contractors. The third one will accommodate the delegates of the Khalk Maslakhaty this year in Turkmenabat. And now one more palace is going to be built in Dashoguz.

The residents of Turkmenistan are normally happy about the construction of new buildings. In a country where the unemployment rate continues to remain at a high level, new plants, textile factories, elevators and mill complexes are largely considered not as factors of industrial infrastructure development but primarily as a tool for solving the acute social problem – unemployment.

However, there are objects which annoy people rather than make them happy. Amongst these are the palaces, fashionable hotels and theatre halls. Every time a TV announcer reads out the text of a presidential decree about the construction of a new costly project, the people are puzzled: why build it? Who needs it?

Indeed, why build the Rukhyet palaces which will accommodate the sessions of the Khalk Maslakhaty once every 5-6 years and will stay empty for the rest of the time? The Rukhyet palace was the place where the session of the Khalk Maslakhaty was held last year. And if the instructions of the former President S.Niyazov on holding such sessions successively in each velayat are followed, the palace in Mary will be empty until 2012. In other words, the project which cost dozens of millions of dollars will serve merely as an architectural monument of economic mismanagement.

Such out of service useless "monuments of nowadays" will be built in each velayat.

The buildings of musical drama theatres have been built in all velayats. And what? They are empty. People do not attend voluntarily theatrical plays and concerts as all of them are about patriotic topics which have been staged on innumerable occasions. Theatre halls designed for over 500 visitors are filled only during holidays when the students, senior school graders, teachers and doctors are made to attend these "solemn events" under the threat of dismissal from their job or educational establishment.

The case regarding the theatres is clear: the theatre buildings have already been built; nobody will destroy them due to the low attendance rate. However, there are also other objects the construction of which can still be suspended or moved to another place, for instance, the above- mentioned palace in Dashoguz: this is going to be built near the new theatre. This means that along the Gerogly Prospect there will be two empty buildings. The construction site, to put it mildly, is not very suitable. The Rukhyet palace will be built in the Victory Park, i.e. its trees will be dug up. A Dashoguz resident managed to enter the fenced territory of the future construction site and counted 119 old trees - maple trees, elm, ash, Asiatic poplar and other sorts. "If these trees are killed, huge damage will be caused to the city's environment", says a witness.

There are only two parks like this in the town. It is extremely hard to grow trees in the edaphic climatic zone of the Dashoguz velayat where the soils are heavily salted. And now, because of the Rukhyet palace, more than one hundred trees will be destroyed. What did the khyakim of the velayat think when he signed the document transferring the land for the construction of the palace to the park? What architect approved the demolition of this green area?

Now it is not too late to save the park. The construction has not been launched yet. However, if no measures are used to transfer the object to another site (there is waste ground nearby), the residents of Dashoguz will lose the park which has grown up in this place with such difficulties. Instead, they will be presented by the President with another "disposable" giant building.